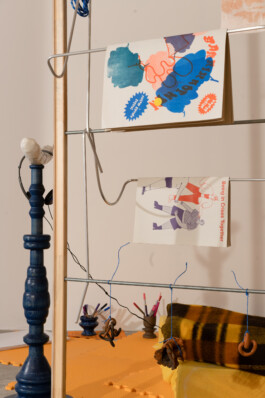 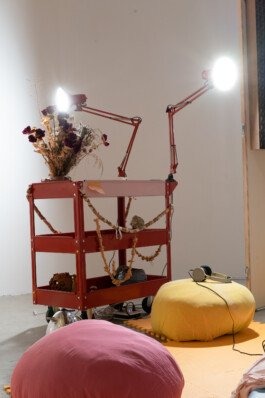 [Image description: Photographic documentation of the exhibition: Warm light from various clamp lamps illuminates the objects in the room. The room has high ceilings and a concrete floor. The dark brown paint is peeling from the ceiling. It is evening. Orange foam mats lie on the floor, above them pillows and blankets in blue, pink, and yellow. Many pillows are lying next to each other, in the middle of the room, with headphones on top of them. Wooden screens are scattered around the room. Ceramics and batiks hang from them and from the ceiling. A red workshop trolley stands in the room to the left of the central pillow island. On it are books, zines, dried flowers and ceramics. Some Paravents have displays hanging fom them containing the script of body barricades]. 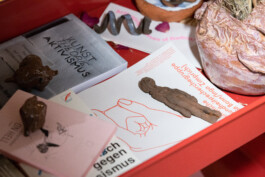 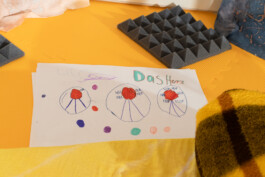 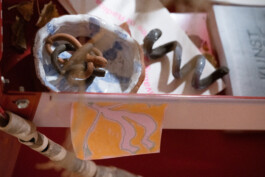 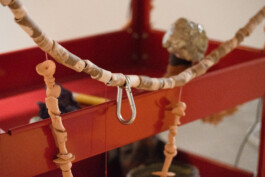 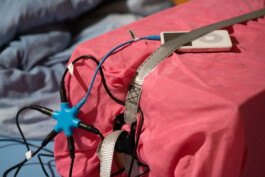 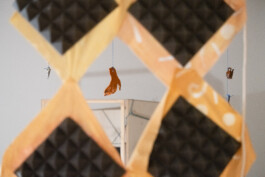 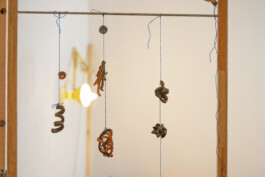 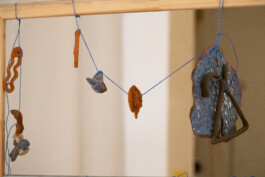 This is the tale of trash and trashure who went along with moaning pleasure far apart yet hands in hand
through the litter wonderland.

Barricades are protective walls during riots, usually improvised from objects of everyday life.The objects that make up these barricades have no logical connection.They do not follow any particular construction.They touch each other randomly, lying on their heads.A table top without legs wedged together with a bicycle, next to it a commode without drawers.They are fragments of a whole, have lost their function and gained a new one.

Body Barricades is a sound piece made of many voices and some, familiar sounds.The voices speak partly personal, partly abstract.They contradict each other.They try to speak together, to move on, to in_vent ways of action.

The sound piece consists of fragments of recordings from this year and archival footage with African American activist Sista Souljah from 1992.

Body Barricades begins with the state of not being able to cope, of exhaustion: being motionless, being late, being tired, getting drunk. Here the bodies themselves appear as barricades in the way of smooth functionality.They disturb, interrupt, stop.

What potential does this moment hold for the development of common, solidarity and critical practices? And who is exhausted and how?

The second part is about a background of multiple exhaustions.They are created by precarious housing and wage labor relations. By attributions from the outside.Through lack of access to resources.Through shame and the desire to disappear.

But also turne to a positive: becoming aware of one's own class through the sensation of shame means the possibility of emancipatory self- transformation or self-conscious insistence on difference.

Whatever path the speakers take, what is important to me at this point is Sister Souljah's

A personal and fragmentary practice unites almost all the speakers. It is the creation of their own collections, dedicated to the worthless but beautiful, the fragmentary and random.Which remain illegible and unreadable. Snippets. Receipts. Bottle caps.A piece of algae.A colourful glass bottle. Large bags full of things that might be needed.Thin plastic bags from the grocery store. Plastic sheets to protect friends' butts from splinters while fucking. Small gestures of care and concern that defy commodification.

"I carry around snippets that can't be put together into something coherently larger." says Mauve in Körper Barrikaden.And Melo responds in rhyme: This is the tale of trash and trashure

who went along with moaning pleasure far apart yet hands in hand
through the litter wonderland. 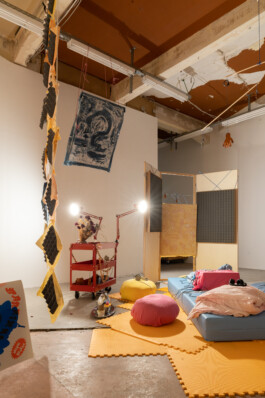 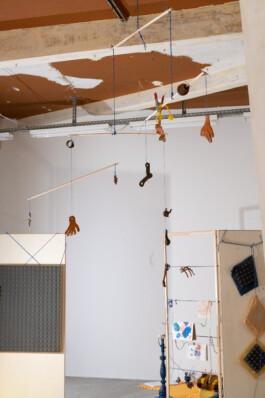 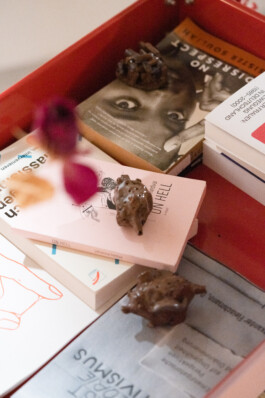 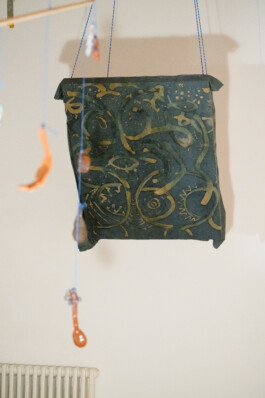 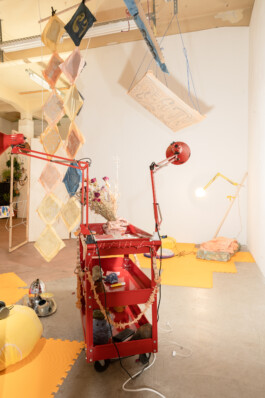 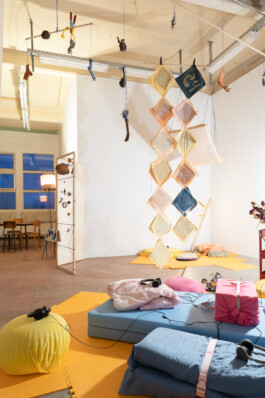 Körper Barrikaden (Body Barricades) is a sounding landscape- an attempt to approach failing and failed bodies in the art and culture industry.

Body Barricades collages the voices, sounds, material and strategies of 10 artists and collectives who explore the question in which setting we feel this double failure particularly drastic: How does the art and culture industry commodify our bodies or push them to change shape? What does it mean to grow into an academic body when one's family inhabits working-class bodies? We ask ourselves what we actually want to erect barricades against, how we protect our bodies and practices and what physical solidarity in coexistence could look like.
The collected material is contradictory, surprising, fragile, playful, intimate & indignant. It is embedded in a room that invites us through cushions, carpets and blankets to linger horizontally, to rest and to listen together. 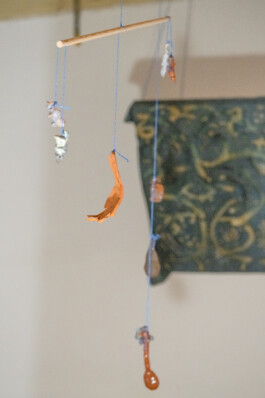 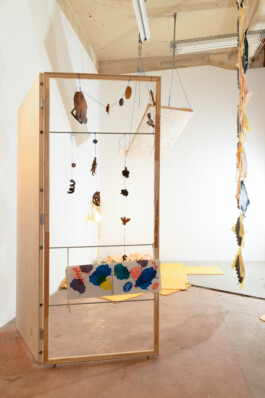 With the voices, sounds, material and strategies of:

Want the Zine? Drop us a mail at mail@failure.academy